The best place in Africa to see Gorillas

Rwanda vs The Republic of Congo

There is no easy way to see Africa’s gorillas; this is a sighting the visitor must work for. I begin – mercifully, perhaps – with the most challenging of my two expeditions in Africa’s gorilla heartland: Odzala-Kokoua National Park in the Republic of Congo where primatologist Dr Magda Bermejo and her husband, German Illera, have been studying western lowland gorillas for the past two decades.

The effort begins with the journey, for this is a remote part of the world, four flights distant from my hometown of Sydney, including a two-hour charter flight north from the country’s capital city, Brazzaville. But herein lies the thrill: I am charting a territory utterly unknown to myself. Until a few years ago, I barely knew this place existed.

There are also the mental obstacles one must overcome, for that amorphous place called ‘the Congo’ exists in most people’s consciousness as Africa’s foreboding heart of darkness. But there are, in fact, two Congos: the Republic of Congo, where I am headed, and its somewhat unstable and globally infamous neighbour, the Democratic Republic of Congo. How many people have put off travelling to the former, I wonder, after mistaking it for the latter?

The country’s loss is the tourist’s gain, for those adventurous souls who do venture into the Republic of Congo will have this beautiful place (almost) all to themselves. But word about Odzala Discovery Camps’ luxury lodges in the park – Ngaga, Mboko and Lango – is slowly getting out: I arrive just after a large tour group has departed. We are all lured by this vast patchwork of pristine rainforest, savannah and swampland and its resident wildlife: forest elephants, sitatunga, hyenas, buffalo, monkeys and birds like the great flocks of African green pigeon that sweep into the bais each morning to feast on minerals.

But it’s the gorillas that are the stars of this show. Accompanied by a tracker and two guides, I set off early in the morning from Ngaga Camp (located in a concession just outside the park’s official boundary) to search for one of the groups habituated by Bermejo and Illera. The humidity is almost as thick as the vegetation, and we must wade through them both in order to claim our exhilarating reward: an hour-long encounter with a group of western lowland gorillas. We watch in silence from a nearby clearing as they feast on leaves and fruit in the canopy, rest human-like in the crook of branches, crash gleefully from one tree to another.

Our encounter with a second group the next morning is even harder-won: though the walk is mostly flat this time, the bush is even less penetrable and as we approach our quarry it begins to rain. Our tracker stops periodically to listen, then continues hacking a course through the undergrowth. We plunge through it, and the bush parts before us to reveal a magnificent silverback perched in a tree. Everything is silent bar the patter of rain and the stripping of leaves from the bark as the silverback brings them to his mouth. What a miracle it is, to observe our wild relatives from deep inside this vast and inscrutable equatorial rainforest.

It’s a figurative leap across Africa’s fat belly to the mountain gorillas roaming the volcanoes straddling the borders of Rwanda, Uganda and the DRC. At Rwanda’s Volcanoes National Park I discover a better-trodden path than that of the still-emerging Republic of Congo: though Rwanda remains a pipe-dream destination for many, it brims with tourists in poignant testament to its recovery following the genocide of 1994.

It’s threatening rain when we set off up the volcano’s slopes, and soon the deluge has set in. I’m grateful for the porter I’ve hired – though his job is ostensibly to carry my backpack, he also helps me navigate the water-slicked path leading through the forest. It’s an uphill climb, but not for long: around an hour after setting off we have reached the group of gorillas. They are scattered through the bush, taking shelter from the rain: a mother hugging her baby to her chest; juveniles huddling together beneath a canopy of leaves. In a clearing sits a mammoth silverback, cross-armed and gloomy-faced beneath the drumming rain. He’s so close I could read out and touch him.

Later, warming my rain-chilled body beside the fire at Virunga Lodge, I reflect on my encounters with the great apes. Each group, I conclude, epitomises the country it inhabits: the western lowland gorillas, like the Republic of Congo, are elusive, mysterious and little-visited; the mountain gorillas, like Rwanda, are resilient, much-loved and on the map. All are testament to the importance of conservation, and are life-affirming in their own exhilarating way.

Catherine Marshall is a Sydney-based journalist and travel writer. She travelled to the Republic of Congo and Rwanda with The Classic Safari Company. 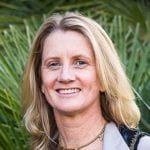